Termites live in cooperative, mixed groups known as colonies where tasks are divided among their specialized members.
Let's talk 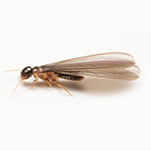 Termites belong to the Isoptera Order of Insects.
Like all insects they have six legs and their body is divided into three parts: head, thorax and abdomen.
These tiny (3.0–22.0 mm) but so…miraculous creatures are among the oldest insects in nature. Their fossils have been found in formations over 100 million years old.
Since then, until today, they feed exclusively on wood and other cellulosic materials. Together with wood-eating beetles, they are the main animal enemies of wood.
They are social insects. Their societies are highly cooperative and cohesive. The individuals of a termite society are characterized by relative longevity, e.g.

Termites live in cooperative, mixed groups known as colonies where tasks are divided among their specialized members. Each society has different scents that make it easier for its members to identify their mates and keep their distance from members of other colonies.

Reproductive: They are the individuals that produce all the offspring of a termite colony and play a primary role in the spread and establishment of new colonies. They are distinguished into primary and secondary reproductive individuals.

Swarming: Usually coincides with periods of rainfall. In tropical countries it occurs during warm nights, while in temperate countries most species swarm during the day (Nutting 1969, Minnick 1973, Higa & Tamashiro 1983). Normally termites avoid light but during swarming their behavior changes. Small swarms may occur throughout the year, even in winter, when swarmers appear near chimneys, heating pipes and other hot spots (Potter M.F. In Mallis).

Workers: They are the most populous caste in termite colonies and are in charge of all the work within them. They are soft bodied and pale white in color and are the ones that actually destroy wood and related materials. They have no wings and no eyes. Their mouthparts however have hard and powerful jaws.

Hoplites: The primary role of hoplites is defensive. Their head is large, strong and brownish-yellow in color and most species have a pair of large jaws capable of piercing, tearing or crushing enemies.

The main nutrient in the materials termites consume is cellulose, the most common organic component in nature. Thus, any material of plant origin can be their food: live and dead wood, branches, roots, grass, plant residues, paper, cardboard, veneer, chipboard (Novopan) as well as various cotton or plant-based fabrics.
Eating the wood, termites tear off thin sections with their jaws without removing them. They swallow them and store them in their stomachs for digestion, from where they share them with their housemates through feeding.

The queens of some species up to 12 years!

The efforts of each member of the society aim at the success of the whole: these societies are self-protecting, self-perpetuating and constantly supplied with food reserves, while the cryptic way of life of the members protects them from enemies and extreme temperature conditions (heat – frost).

In a natural environment, termites are very beneficial as they recycle wood and other related materials, decomposing organic matter and returning it as nutrients to the soil.

The galleries they create improve soil aeration helping plant growth just as earthworms do.
The great destructive potential of termites is due to their voracious appetite and abundance in terms of individuals. Their small societies may number in the thousands while large societies number millions of individuals (Grace 1989, 1992).
Several animal organisms (birds, reptiles, amphibians, mammals, ants and other arthropods) consume termites which are a significant part of their diet, while for many peoples, mainly in Africa, they are a popular delicacy either cooked in many ways or powdered as an additive in food (Berenbaum 1995, Pearce 1977).

Termites are divided into:

The following information concerns the species of termites found, to date, in Greece.

It belongs to the subterranean termites.

The winged perfects have a body length of 6-8 mm and a wingspan of 9 mm. Their body color is glossy brown and the wings are sub-brown.

The prothorax is heart-shaped.

The winged perfect ones are a bit smaller than the previous ones. The wings are lighter in color.

The wings are 6 mm long and each wing is 10 mm.
The general color is brownish-black while the prothorax is yellow.

The life cycle of termites is of interest. It is an organized society, with a king, queen, knights, workers, etc.

Wood infestations are solely due to the activity of the workers, who feed the other individuals of the colony on sucked wood (a phenomenon called “feeding”).

It should be noted that many carnivores show a clear preference for “soft wood” (conifers) while others for “hard wood” (oak, beech, etc.).

When any residence is to be built, the area and soil should be very well researched. There must be no affected trees or bushes, trunks, wood residues (sawdust, scraps), firewood, fallen leaves, etc. in the area.

Chemical methods
With regard to subterranean termites, a barrier of termiticide or a monitoring system with baits is created around the perimeter of the residence between the colony and the wooden structures, while neutralizing the moisture sources above the ground and limiting the humidity in the underground areas of the residence.
In case of a large infestation, drain and ventilate the walls with ventilation grooves. The foundations of the wall or wooden structure are searched for by digging, and then a termiticide is injected in these places and in the soil that is in contact with the foundation.
The holes created are carefully closed with cement (Buchelos, 2003).

Soil fluids. Ground applied liquid termiticides.
Non-repellent. In recent years, there has been a trend towards creating termiticides which are non-repellent, relatively slow-acting and apparently kill larger numbers of termites in the soil.

It is a technique to suppress or even eliminate colonies of social insects, mainly subterranean termites. Often confused with the bait method but in TTR, the toxic substance is applied externally to the termites body as a coating. Coated termites more efficiently transport larger amounts of the toxic substance than termites that have ingested the bait. In field conditions, 50-100 more individuals were killed by each termite clad. It is a method friendly to the environment and the health of people and pets, because it uses small amounts of medicine. Chemical barrier control typically uses more than 5,000 times the amount of drug and their residues persist for more than 20 years. In addition, the amount of drug used is applied only to the target organism, limiting the exposure to it of non-target organisms (Buchelos, 2003).